9/11 trial ‘may not begin for another four years’

The trial of the five men charged over the September 11 attacks on America will not be televised and may not begin for another four years, it has been disclosed. 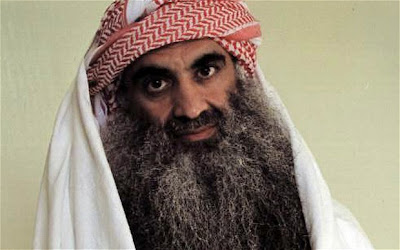 Khalid Sheikh Mohammed and his four co-conspirators are due to be tried at Guantanamo Bay military base for the murders of 2,976 people in what has been dubbed the ‘trial of the century’.

But yesterday both the prosecution and defence conceded that the trial will not be televised, unlike many high profile trials in America.

And the defence claimed that, while the hearings have begun, they do not expect that actual trial to start until 2016 – 15 years after the attacks which prompted the USA’s war on terror and remain the worst terror atrocity in history.

Unlike in the UK, many US trials are broadcast on television and can be watched at home.

High profile cases such as the trial of OJ Simpson and that of Conrad Murray, the doctor accused of killing Michael Jackson, have been televised in America, as have many other US trials.
But yesterday the military prosecutor Brigadier General Mark Martins said that the trial of the 9/11 conspirators would not be broadcast on television, as per the current laws surrounding military commissions. He said: “The government position is that the rule works.”

He said that a “fair and appropriate balance” would be to have the trial screened in selected military bases and courtrooms in the USA.

But James Connell, one of the defence lawyers, expressed dissatisfaction at the lack of television cameras and said that the defence had made representations to the judge, but that the prosecution opposed.

He said: “We have asked for the proceedings to be televised on a feed to commercial television outlets.

“The defence position is that there should be a television feed of this so that members of the public, whether they are victims’ families or people who are interested in these proceedings in the US or worldwide can watch.

“Having a couple of military bases [with a feed] is hardly the same.”

The five face the death penalty if convicted for their roles in the terror attacks by al-Qaeda militants in which hijacked planes were used to strike New York, Washington and Shanksville, Pennsylvania. Before being transferred to Guantanamo Bay in 2006, the five men were held in secret CIA prisons, where they were subjected to interrogation tactics which they say amounted to torture.

The prosecution estimated that the trial was on schedule to begin in June or July next year, but Mr Connell said that he believed it would be much longer, suggesting four years from now as a realistic timescale.

He said: “I recall General Martin talking [in May] about the [Zacarias] Moussaoui case taking four years and I remember thinking at the time that seemed like a reasonable estimate for this case.

“I think it is a long time. It seems comparable to other major terrorism trials.”

Mr Connell said his prediction was based on the “enormous” amount of paperwork the defence still has to read through.

He added: “The prosecution has been preparing for this case for 11 years. It makes sense that now they have gotten round to bringing this case that there needs to be time for all of the information they have spent 11 years digesting that the defence needs time to digest that.”

He added that the decision to hold the trial in Guantanamo Bay rather than New York – a decision taken by the US Government – will also play a part in the delay.

“There is no question that the trial would be quicker in another jurisdiction. There are a lot of issues that would not have to be tackled.” He added that one such problem was “the difficulty of getting people here.”

The predictions came as a series of pre-trial hearings were set to begin at the base in Cuba. Those hearings, which were scheduled to last six days, were cancelled amid fears that a tropical storm is due to hit the island. All non-essential personnel –about 200 people – are set to be evacuated from the island as tropical storm Isaac approaches.